"I let him go, and then Neel was there. He gave me a hug that smelled like his old apartment: tobacco and Dr. Bronner's. His sweater was cold, and I knew he'd been outside, smoking."
—Lost and Wanted, Nell Freudenberger

I’ve always been intrigued by Dr. Bronner’s Castile Soap’s packaging—it’s crammed with a bunch of text, and not unlike baking soda, you can use it in so many ways, from washing your hair to mopping floors to washing your dog (see this example label for the full details). In the quote above, the narrator recognizes the familiar scent of Dr. Bronner’s on an old friend. From reading this, we can gather that Neel no longer lives in the apartment that smelled like tobacco and Dr. Bronner’s, but he still uses the same soap, and he still smokes. He is a creature of habit.

Scent is a strong component of our memories, whether they’re positive or negative. I find it oddly amusing that my brother-in-law and my fiance use the same soap. By the time I met my fiance, the scent of his soap was already familiar to me, thanks to my brother-in-law’s hygiene habits. I guess my sister and I share a love (or at least a tolerance) for the scent of Irish Spring. Anyway, this quote is just one example of the mundane yet realistic details that really resonated with me, and made Lost and Wanted such an enjoyable read.

I haven’t actually tried Dr. Bronner’s Castile Soap, so I have no idea what it smells like—but I have been using and liking one of their less ubiquitous products: Dr. Bronner’s Lavender Organic Hand Sanitizer. This is not my first encounter with a sanitizing/cleaning product that contains lavender. The other one was Asutra yoga mat cleaner, which also contained tea tree oil (read the review here). 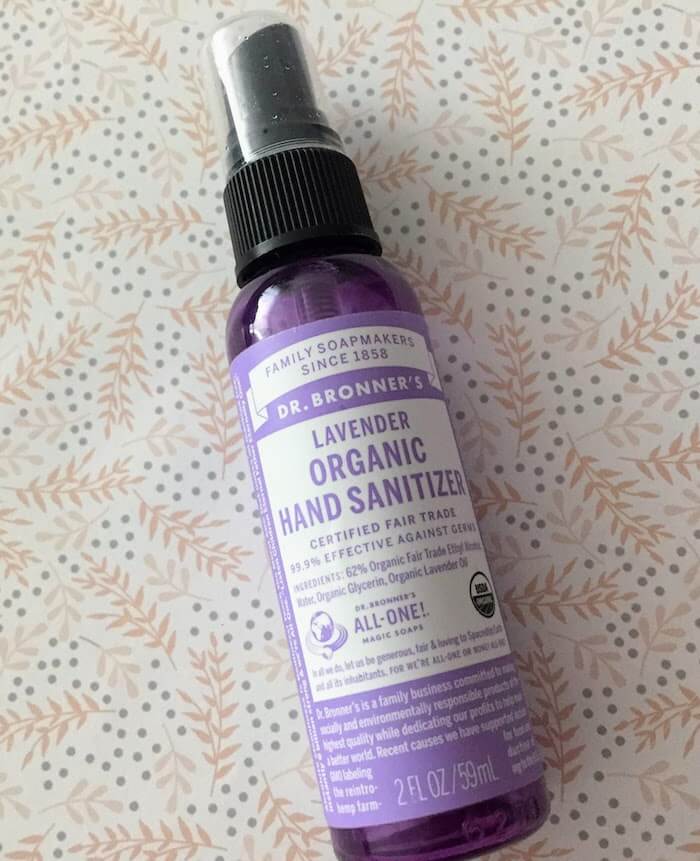 Dear Emily, this is an effective hand sanitizer, but looking at the formula, it may be too thin (too runny) In palms. Ethyl Alcohol, glycerine and lavender oil May be considered Organic if certified, but shouldn’t be listed as “Organic”, because nowadays, Organic may mislead consumer as “Eatable” or “ Free of chemicals”, “Safer to consume”.., there are lots of people (alcoholics and/or teenagers) misuse hand sanitizers. All marketer should assume more social /health/safety responsibilities.

My dad is worried that since they labeled the ethyl alcohol as organic, some consumers (particularly teenagers) might take this word (which is normally associated with food/beverages) as one more reason to justify consuming it like an alcoholic beverage. I had never considered this before, but apparently it’s true—teenagers are getting drunk off of hand sanitizer. What has the world come to?

I guess it makes sense, since hand sanitizer is so high in alcohol content (and it’s chemically the same alcohol that’s present in actual alcoholic beverages). However, when ethyl alcohol is used in products that aren’t meant to be consumed (e.g., skincare, sunscreen), it’s usually labeled as “alcohol denatured,” meaning that an additional substance has been added to make the alcohol taste bad, so people won’t drink it or misuse it. The ethyl alcohol in this hand sanitizer isn’t labeled as “denatured,” but maybe the lavender oil helps make it taste so bad that no one would want to drink it. Still, my dad thinks it might be safer to make it clear that it’s not for consumption, only for topical use, especially if it is going to market itself as “organic,” a word that we typically associate with food/drinks rather than topical substances.

My dad also thinks that this hand sanitizer may be too runny or thin to apply to your palms. Since it comes in a spray bottle, it’s not such an issue, but I see what he means. The texture of this hand sanitizer is pretty similar to water, but it dries faster, thanks to the high concentration of ethyl alcohol. Unlike other hand sanitizers that are gel-based, this one just sprays on instead of coming packaged in a squeeze bottle. I think that’s actually the right way to package this product, since it’s not as thick as your typical Purell hand sanitizer. Purell hand sanitizer, for reference, is more gel-like and feels pretty similar to the Dr. Bronner’s hand sanitizer in that it dries more quickly than the equivalent amount of water. However, it contains Acrylates/C10-30 Alkyl Acrylate Crosspolymer, which helps thicken it into a gel, rather than a runny liquid like Dr. Bronner’s.

I’m usually not a big fan of hand sanitizers—I prefer to wash my hands with soap and water, if I can, particularly because the alcohol in hand sanitizers can sting my eczema-ridden palms and/or irritate my sensitive skin even when I don’t have an active eczema flareup. However, for those times when you just can’t access a sink and wash your hands, a hand sanitizer can be a nice thing to keep in your handbag. In the past, I’ve always used the gel-based hand sanitizers you find at drugstores, usually Purell or generic store brands. Dr. Bronner’s Lavender Organic Hand Sanitizer is like the upgraded version of that ubiquitous version. It comes packaged in a spray bottle and is infused with lavender oil to help make you feel more like you’re getting pampered—not like you’re about to get a flu shot.

Indeed, the science backs it up…according to this study, inhaling lavender oil helps decrease blood pressure and heart rate. This hand sanitizer has a nice lavender scent that’s not too overbearing. The scent actually fades after a little while, instead of lingering for ages (or maybe it’s because eventually I wash my hands, so I wash off the scent). In contrast with the typical non-lavender, alcohol-based hand sanitizer, it feels almost like a spa experience, rather than something you’re forced to apply in hopes of dodging that nasty bug that’s going around the office.

I think I also like that it’s more watery and less thick than the typical gel-based hand sanitizers that dominate the market. The spray bottle is nice because it makes it easy to dole out a consistent amount every time: I know I can cover my hands in two or three spritzes. With a regular gel-based hand sanitizer that comes in a tiny bottle, I usually end up squeezing out too much or too little, depending on how much is left in the bottle—I never get it quite right.

I also like that it contains glycerin to help offset the drying effects of ethyl alcohol. It does dry out my hands a little bit, but as long as I apply some hand lotion afterward, it’s manageable. I also like that it doesn’t contain any unnecessary fragrances—the lavender oil serves as a nice scent in and of itself, and helps cover up the harsh odor of ethyl alcohol.