Disposable razors. Sure, they’re innocuous enough to pack in your carry-on luggage, but anyone who’s ever had razor burn knows that they can pose a danger to sensitive skin. The Bic Soleil Sensitive Disposable Razor is marketed to ladies with sensitive skin, and people who like purple. I don’t really understand the idea of “gendered” razors, but that’s a whole other topic that extends beyond the scope of this post. Although I normally wouldn’t buy a product like this, it was included in last quarter’s Walmart Beauty Box, so I had the chance to check it out. 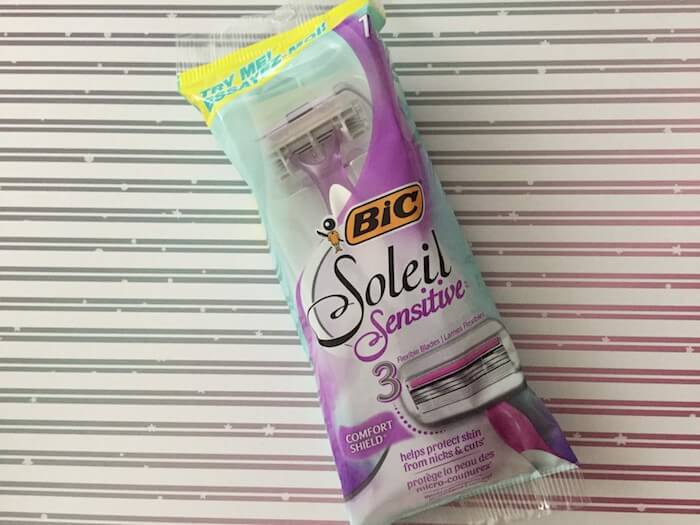 I asked my dad for his thoughts on the “lubricating strip with Vitamin E and aloe” that is included in this razor. I also asked if he could provide an estimate of how long the strip would last. I also asked him how many times you could expect to shave with a disposable razor. Here’s what he had to say.

Dear Emily, these strips usually last as long the life of the razor. Depending on the thickness, area of hair, beard and or mustache also the frequency of shaving, it’s hard to say how many times you can shave with this razor, therefore assuming shaving once a day, it may last from 1 month to 120 days. (If flush out whatever stuck in between blades after each use)

The life of your razor will depend on a number of factors, including what type of hair you’re shaving (beard, mustache, legs?) and how often you shave. In my experience, one month is about right since I usually use disposable razors on my legs and underarms.

Not-so-“ladylike”-confession: I’m not religious about shaving every possible square inch of hair on my legs and underarms, particularly in the winter when I’m just going to be all bundled up anyway. And I have arm hair, but I never shave it off. Meanwhile, Mr. MDTC has perfectly smooth arms—not a hair in sight. Not fair, right?

The Bic Soleil Sensitive Disposable Razor includes three blades and a strip of moisturizing aloe and vitamin E. My favorite part was the flexible handle/head—it maneuvered smoothly across my knees and ankles without any issues. 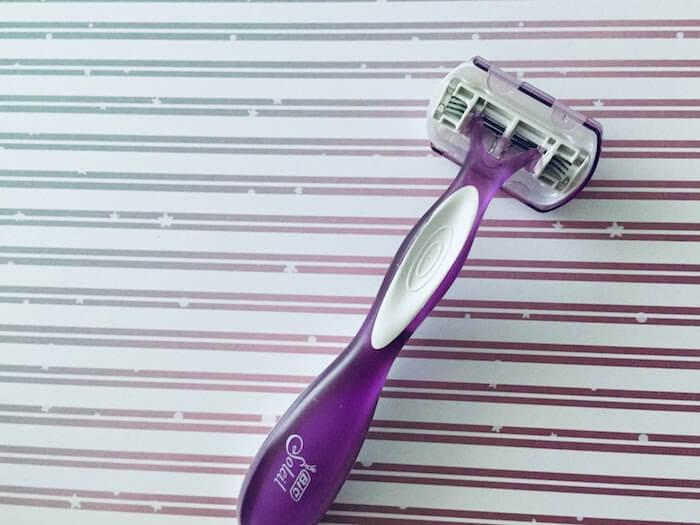 I packed my Bic Soleil Sensitive Disposable Razor for a bachelorette party, which is high praise. I trusted this razor to help me look more “ladylike” than my usual tomboyish self. It’s sharp enough to do its job, but not overly sharp or abrasive on your skin. I’m not sure if the moisturizing strip is the real reason, but it was very gentle on my skin and didn’t cause any irritation. However, I did notice that this razor doesn’t give you as close of a shave as some other sharper options out there. I don’t think this is a huge problem, though, since I can just shave again the next day if I really need smooth skin two days in a row. It seems like a fair tradeoff for not irritating my skin.

To reduce irritation when shaving, you can also use shaving cream (I’m normally too lazy to add this extra step). I also try not to shave dry skin. To reduce the chances of aggravating sensitive skin, Bic recommends shaving at night and after using a gentle, exfoliating scrub.

This razor does have a downside. After the blades lose their edge, you’ll need to dispose of the whole razor, which leads to a lot of plastic in our landfills. Usually I prefer to buy the kind of disposable razor that lets you pop off the blade portion and replace the cartridge, instead of forcing you to throw out the entire thing. However, this actually makes it a good option for travel, since you might accidentally forget it at the hotel, or run out of space in your luggage. In that case, you might appreciate how disposable it is, handle and all.

The most environmentally conscious choice, of course, is not to use any kind of disposable razor at all. If you’re in this camp, you might want to check out an option like an epilator, which is like a pair of electric tweezers. You never need to sharpen an epilator or throw out old cartridges—once you buy one, you’ll generally be covered for a very long time. However, epilators can be a bit rough on your skin since they pretty much just pluck out your hairs instead of just shaving off the visible portion like a regular razor.

Bic also makes another model, the Soleil Shine razor, which has five blades instead of three. That one includes a moisturizing strip as well, only with aloe and cocoa butter instead of aloe and vitamin E. If you like the idea of a razor with more blades—or you like cocoa butter more than vitamin E—the Shine model might be a better choice for you.