When I was growing up, I used to drink multiple cups of milk every day. Although I only drink non-dairy milk these days, I still always think of milk as this really nutritious, feel-good thing (maybe I’ve been brainwashed by the “Got milk?” ads). So when a beauty product calls itself a milk (even if it doesn’t contain a drop of dairy), I feel positive vibes about it right away. This could be the reason why I immediately had a good feeling about HADA LABO Goku-Jyun Milk when I first heard about it.

A bit of HADA LABO background

HADA LABO is a Japanese beauty brand that has done a great job with marketing itself as a no-fuss beauty brand that prioritizes science over fillers (like fragrances) and fancy packaging. It’s also pretty affordable. The company claims that it sells a bottle of its face lotion every two seconds.

The company has focused heavily on a key ingredient in its moisturizing skincare products: Super Hyaluronic Acid. This ingredient was patented by Shiseido and is supposed to hydrate the skin twice as much as any regular hyaluronic acid. I’ve been meaning to try it for a while now, so when I saw HADA LABO Goku-Jyun Milk Moisturizer on sale at my local Japanese supermarket, I was pretty happy to have an excuse to try it sooner rather than later. 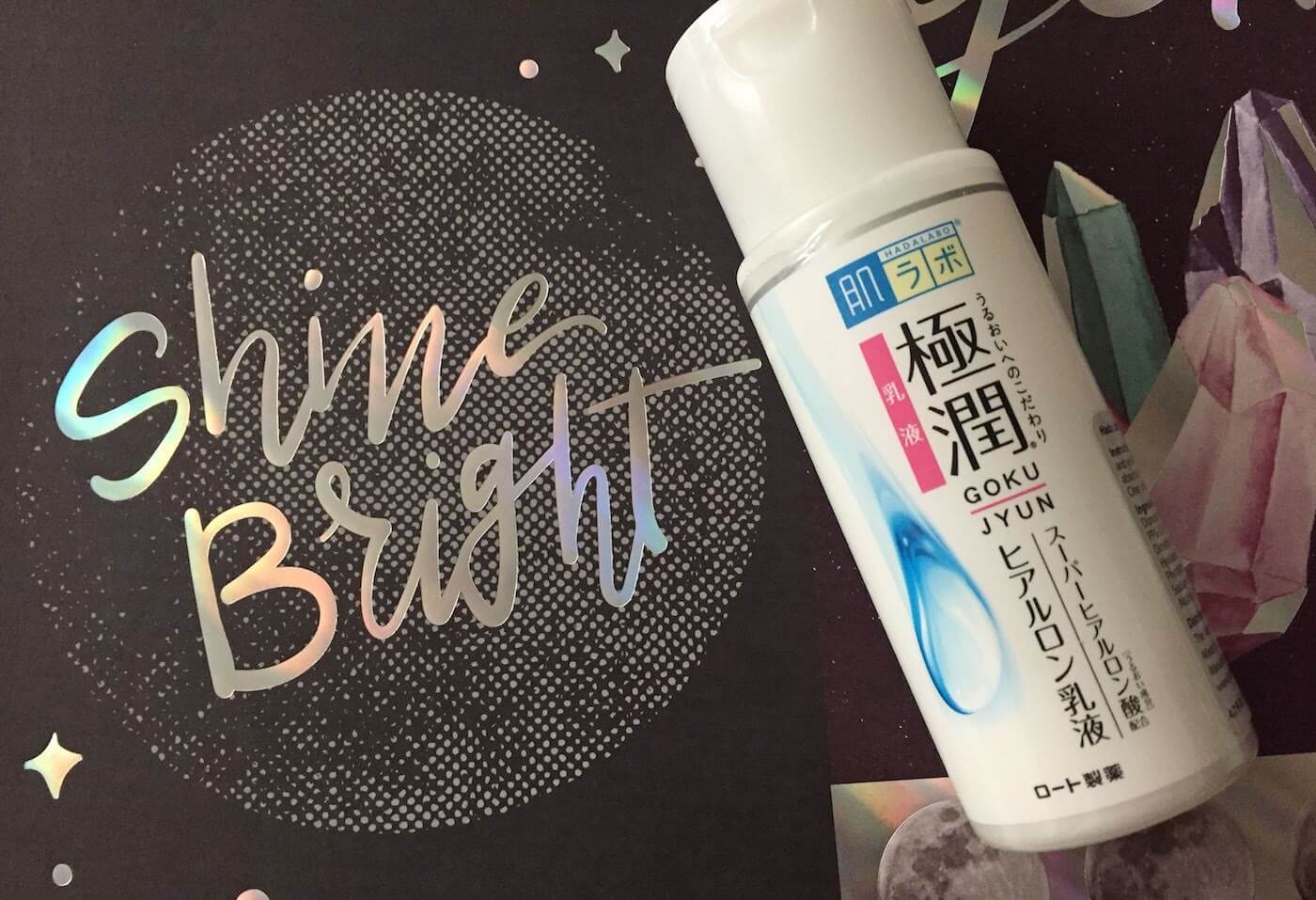 One reason I decided to buy the milk vs. the lotion was I liked that it contained squalane. However, for some reason, I saw slightly different versions of the HADA LABO Goku-Jyun Milk ingredient lists online vs. on the package I picked up at my local Japanese grocery store. The main difference is that squalane is missing from the online version. Nevertheless, most of the ingredients remain the same across both versions. I’m not sure if it’s a translation difficulty or the company reformulated the product (and I have an older or newer version in my possession).

Only the third through seventh ingredients of HADA LABO Goku-Jyun Milk differ. Here are a few things I noticed: 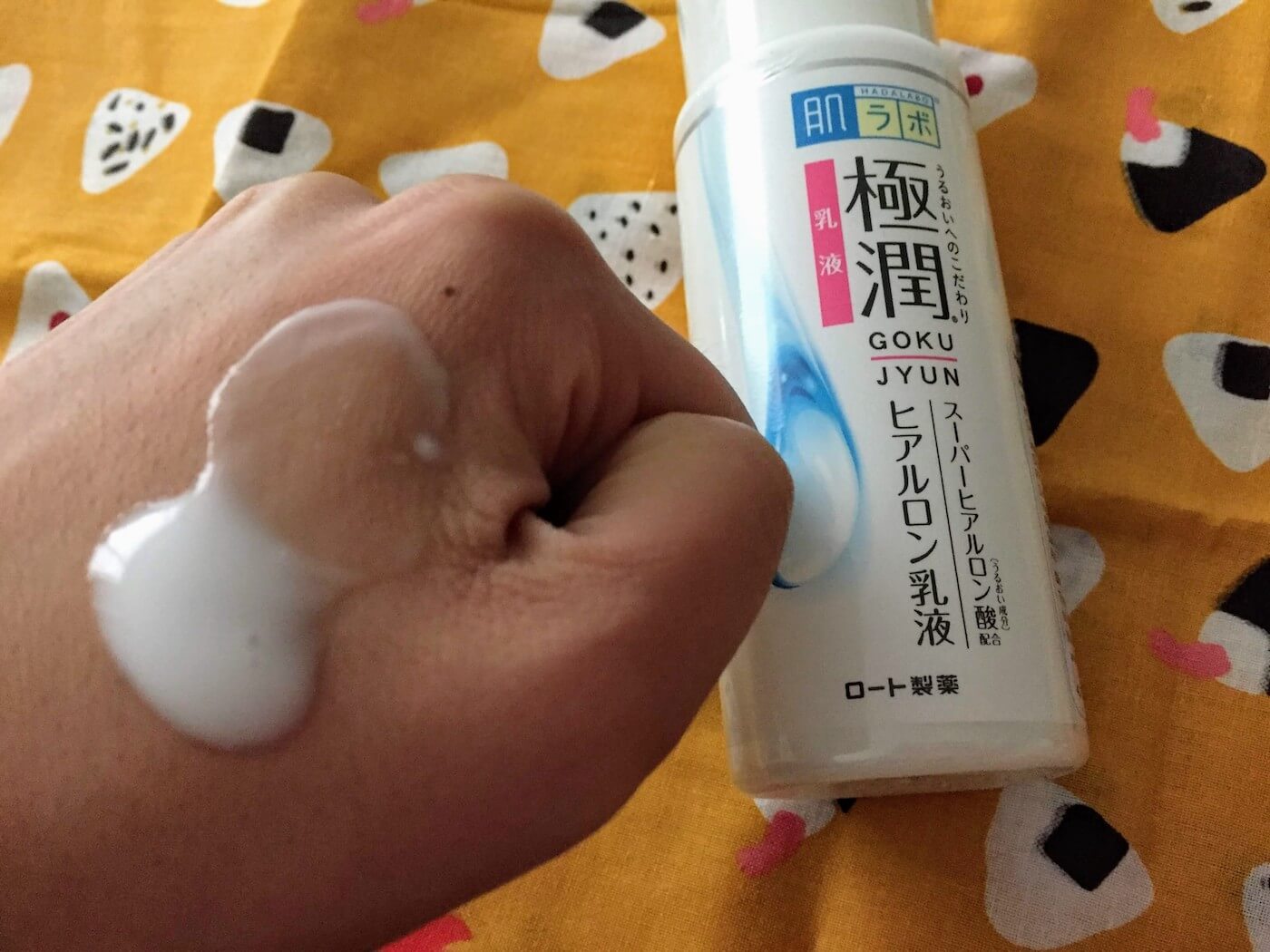 Regardless of which version you look at it, it seems like Hada Labo Goku-Jyun Milk contains quite a few hydrating ingredients, including a whopping three types of hyaluronic acid: hydrolyzed hyaluronic acid, sodium acetylated hyaluronate, and sodium hyaluronate.

Sodium acetylated hyaluronate is the “super hyaluronic acid” I was talking about earlier. I was surprised to see that this ingredient was actually developed and patented by Shiseido, not HADA LABO. Granted, HADA LABO’s site never claimed that the company itself developed this ingredient—I guess I just assumed that it was developed internally since it was so heavily marketed on its website.

HADA LABO formulates its skincare products so that they’ll have a pH level between 5.0 and 6.5, which is closer to the natural pH of skin than higher-pH products like soaps, which typically have a high pH from 9-10. High-pH products can dry out the skin and disturb your natural skin barrier.

According to this study, human skin pH is between 4.0 to 7.0, but healthier skin typically has a lower pH value, below 5.0. Skincare products should generally be a bit more acidic in order to maintain beneficial “flora” or bacteria that benefit the skin. This other study found that skin conditions like atopic dermatitis (eczema) and acne tend to lead to higher pH of the skin.

Therefore, I like that HADA LABO formulates it products with this in mind, and is conscious not to manufacture products that have a higher pH that could dry out the skin, damage your skin barrier, or worsen conditions like acne or eczema.

The directions say to “gently massage” about a dime-sized amount on your face and neck. I wanted to test my memory of the size of a dime (I don’t use cash very often anymore), and I think I actually got pretty close. 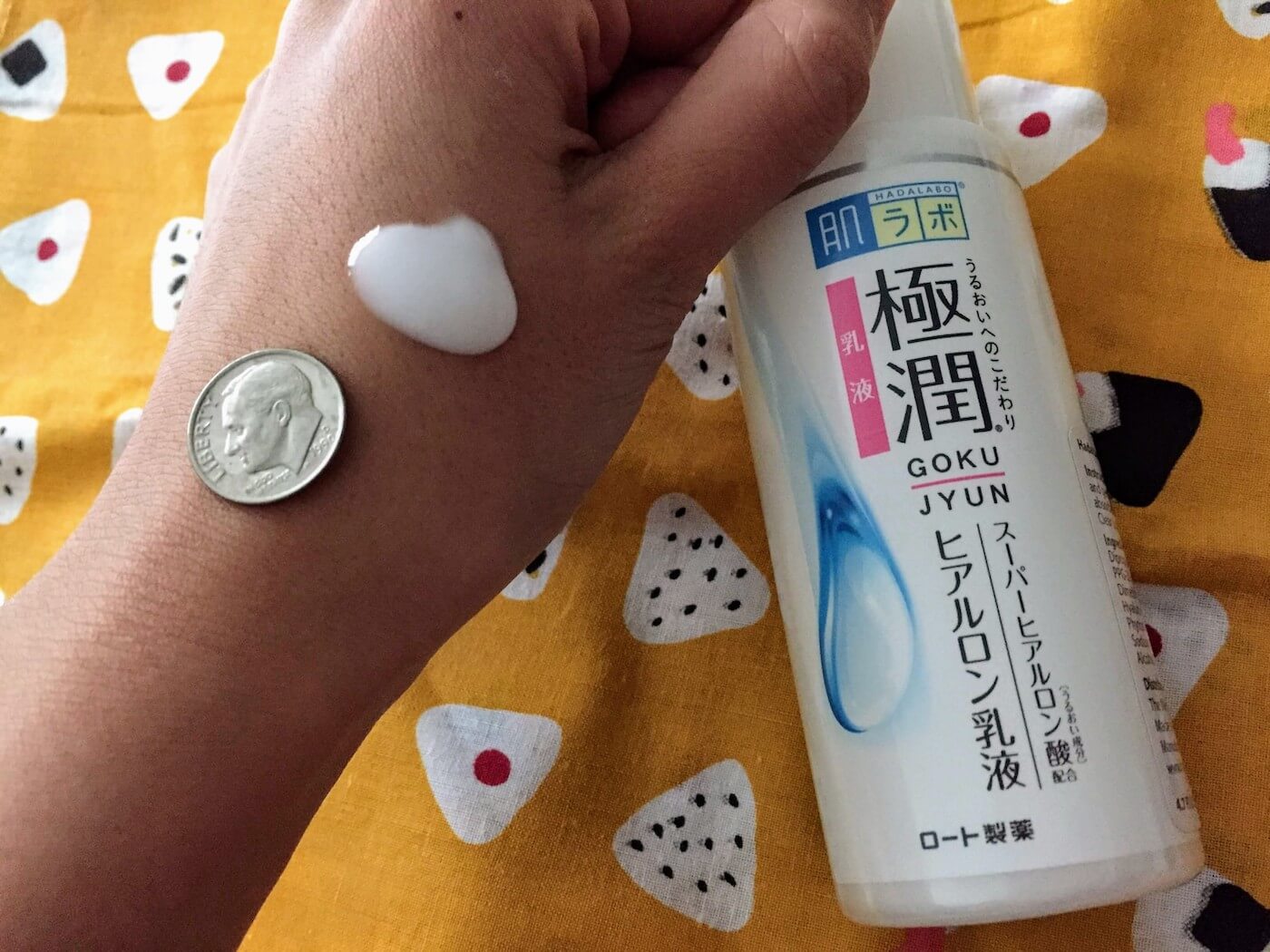 The milk feels closer to a serum than a cream. It’s runnier than CeraVe Moisturizing Lotion, but not quite as runny as something like COSRX Snail Mucin Essence 96. It’s actually pretty similar to CeraVe Hydrating Facial Cleanser, come to think of it.

HADA LABO recommends rubbing the product between your hands and then padding the product onto your face and neck. This is actually the same technique recommended to me by a Sephora associate during my 15-minute mini-facial.

The product doesn’t have any fragrance at all, which I like quite a bit. It feels pretty sticky and slimy at first, but after it dries on your skin, you won’t feel much stickiness anymore. Even after it dries it will still feel like it provides a protective layer on your face. I like it quite a bit. I think it helps address dryness associated with using Differin and other drying products like mandelic acid. It feels richer than CeraVe Moisturizing Lotion, even though it’s runnier (if you squeeze it onto your hand and tilt your hand down, it will slowly run down). I’ve been using it as a layer after CeraVe PM Moisturizing Lotion, and I think it’s been providing quite a bit of hydrating properties that helped my skin recover from the drying effects of my trip to Las Vegas.