Do you shower at night or in the morning? Or both? I’ve always been a member of the nighttime shower camp, but even if I hadn’t already been one before, I think moving to New York City would have convinced me to come over to the dark side. After walking through the gritty streets of the city, you just want to wash away all that grime after you come home.

One of the most important steps of my nightly shower is removing the physical tinted sunscreen from my face. I’ve tried a few different things, including makeup remover wipes. Although wipes generally work really well, they can be irritating for my skin (because they often contain harsh preservatives), and they’re not so great for the environment. I’ve always been curious to see if microfiber pads like the MakeUp Eraser could offer an eco-friendly, non-irritating alternative that could be better—not only for the planet but also for my sensitive skin.

I picked up a package of Maske Halo Makeup Remover Pads at TJ Maxx to see if they could do the trick. The package promised that it would be able to effectively remove makeup, lipstick, mascara, and the like with water alone—no need for soap, micellar water, or makeup remover. 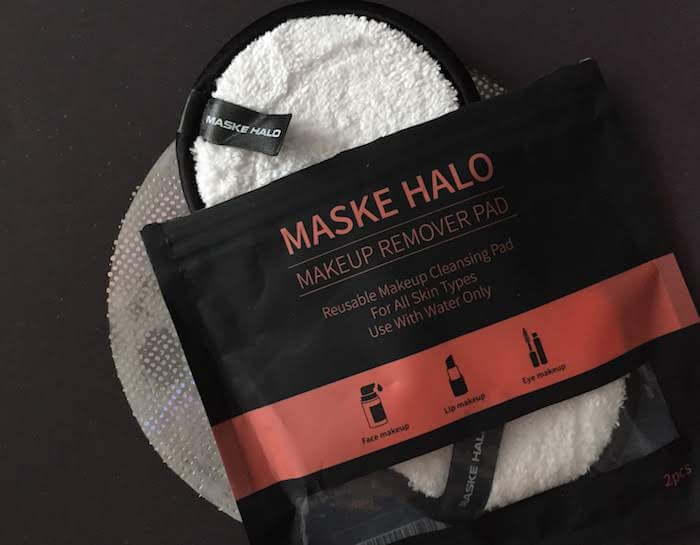 I couldn’t find a strong presence for Maske Halo online, but it appears to be the same company that makes Face Halo makeup remover pads. They look virtually the same, just that the tag says “Face Halo” instead of “Maske Halo.” Either TJ Maxx is just stocking the older version of this product, which has since been renamed to Face Halo, or it’s a knockoff.

I was excited to see if warm water could remove my sunscreen effectively in the shower. I wet it under the showerhead and swiped it over my face. For some background, I’m talking about Australian Gold Botanical Tinted Sunscreen here. It leaves a matte finish on my face, and is very difficult to remove without the help of micellar water and/or copious amounts of oil cleanser. Neutrogena Makeup Remover Cleansing Towelettes also work pretty well, as do CVS Just the Basics Cleansing Towelettes.

Maske Halo Makeup Remover Pads was able to remove most of my sunscreen, but it didn’t come off seamlessly. I had to keep wetting the pad several times with more water. I also had to rub pretty hard on my skin to make sure all the sunscreen would come off. It definitely didn’t melt into the microfiber pad, like I had hoped. I wish it would have been easier to remove, so I wouldn’t have to put so much effort into swiping it roughly across my entire face. On the plus side, even though the pad started getting stained by the tinted sunscreen almost immediately, it was pretty quick and easy to wash off with a little bar soap.

From the looks of this puff, I thought it would have been more soft and gentle on my skin, but it was only slightly softer/fluffier than a terry cloth towel. It did remove most of the sunscreen, but I think it still left about 10%—I still had to use an oil cleanser afterward to get the last trace of sunscreen off my face. It’s possible that if I had tried rubbing my face a few more times with gusto, I could have removed 100% of the sunscreen. But since I didn’t want to rough up my face and tug it any more than I already did, I decided to just call it quits.

I don’t wear makeup, so I don’t know how effective this puff would be as a makeup remover. However, if it wasn’t able to do a great job at removing physical tinted sunscreen, I can’t imagine that it would be much better at removing makeup. I would recommend looking for a different type of microfiber makeup removing cloth instead—perhaps one that has lots of good reviews like this one (side note: I purchased those microfiber cloths a few weeks ago, and will publish a review soon). Lesson learned: Buying things at TJ Maxx is fun and instantly gratifying, but if you’re buying a type of product you’ve never used before, it might be better to do more research and read reviews online to make sure that you know what you’re buying.