I love to travel—and I always have a hard time squeezing everything into my TSA-approved bag of beauty products. So I’m always curious about solid versions of skincare staples, including Aveeno Moisturizing Bar for Dry Skin, which is marketed as a facial cleansing bar for sensitive skin. It comes packaged in a simple paper box and could easily fit into my backpack when I’m traveling. Since it’s 100% solid and 0% liquid, it won’t take up any room in my precious TSA-approved bag of liquids. Yay!

When I picked up this bar, I knew next to nothing about it. Apparently, it has a dark history. Many people have issued complaints on the Aveeno website about the terrible formula change; they say that the new version irritates their skin, and that they used to love the old version of this bar. I was curious to see what had changed in the formula, so I did a little research and decided to ask my dad for his thoughts. Read on to see what he had to say about the formula change, and what he thinks about the current version of this bar, and what I think oft his bar after using it over the last few weeks. 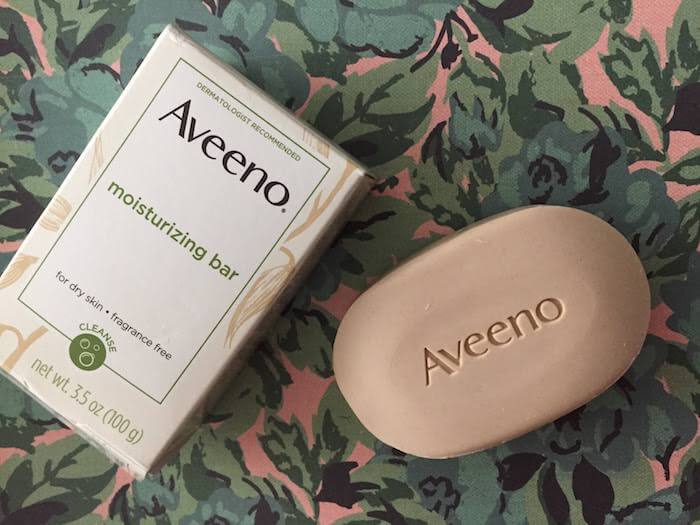 I’m not 100% positive that these are the old ingredients, but I did some Googling and found the following version on several national retail websites.

From a quick glance at both lists, it looks like the old ingredients list included oat flour higher up in the list. Oat flour is in many eczema lotions as a soothing and skin-protective ingredient.

The old formula also contained sodium trideceth sulfate and hydrogenated castor oil, which were removed in the new formula. The new version of Aveeno Moisturizing Bar for Dry Skin contains many ingredients that were missing from the old version:

I asked my dad to speculate about what ingredients in the new formula might be causing irritation for some people. Here’s what he said:

Dear Emily, it may be from Benzyl Alcohol, it’s on EU Allergens. I think they use it as a preservative, they should replace it.

The other potential skin irritants they should avoided or replaced is paraffin and/or sodium chloride, none of the other new ingredients should not cause irritation for skin.

Sodium chloride is actually the same thing as salt. Ever heard of rubbing salt in your wounds? Since this bar (the new formula, at least) includes salt, it might not be the best option for open wounds…or sensitive skin that gets easily irritated or has a broken moisture barrier.

According to the European Union’s Scientific Committee on Consumer Safety, benzyl alcohol is potentially an allergen. But it’s used pretty commonly as a preservative in the U.S.—I see it on 21 products in the ingredient database, including Cetaphil Moisturizing Lotion, which is typically one of those products that is formulated for people who have sensitive skin.

According to the European Commission, in addition to benzyl alcohol,12 other ingredients were most commonly reported as allergens and may be of concern: amyl cinnamal, amylcinnamyl alcohol, benzyl salicylate, cinnamyl alcohol, cinnamal, citral, coumarin, eugenol, geraniol,hydroxycitronellal, hydroxymethylpentyl-cyclohexenecarboxaldehyde, and isoeugenol.

My Dad the Chemist’s review of Aveeno Moisturizing Bar

Dear Emily, Sodium Cocoyl Isethionate is one of the mildest soap surfactant available for making soap, shampoo, body wash or other cleansing applications.

The Aveeno bar soap should be a good bar soap formula for normal skin, I don’t know if contents of fat and oils is sufficient for dirty skin, need to try to wash hand with it the rinse it off, air dry (not with towel), then check and feel if your hands are moisturized, if yeas, it’s a good formula for “dry skin”.

I’ve been using Aveeno Moisturizing Bar for Dry Skin for a few weeks now, and I think it’s a decent body soap. It’s designed to be a facial cleansing bar, but when I tried using it on my face, it made my skin feel slightly itchy, so I decided to stop using it as a face soap. I do think that it’s suitable for use as a body soap, but I probably prefer to use Dove Sensitive Skin Beauty Bar over this.

I like that it is fragrance-free and that it contains oat flour, which is supposed to be soothing for eczema. It also foams up pretty decently, but isn’t overly foamy (which can be drying). It’s fragrance-free in the sense that it doesn’t contain any added fragrances, but it’s not fragrance-free in the sense that it doesn’t have any odor at all. It has an odor that some people might fine unappealing; I don’t find it that horrible, since I would much rather smell the natural odor of the functional ingredients in a soap than have to put up with a scent that’s based on floral or overly synthetic fragrances.

Maybe it’s because it’s formulated for dry/sensitive skin, but it doesn’t seem like Aveeno Moisturizing Bar for Dry Skin is strong enough to remove physical sunscreen by itself—you’ll need to rub your skin pretty vigorously if you want to remove any lotion or sunscreen that contains waxes or oils. This makes it somewhat of an ineffective body soap for people who tend to use those types of products. Since I initially bought this soap with hopes that it could replace my travel-size face soap, but it ended up irritating my facial skin, I probably won’t be repurchasing this soap.

To sum things up, I learned a few interesting things from writing this post and asking my dad about the formula change: