A reader recently reached out to ask about some disappointing changes they had noticed in a fairly new bottle of CeraVe PM Facial Moisturizing Lotion. The new formula smelled terrible, and it created a temporary burning sensation upon application. Here’s what they said:

They just rolled out a new ingredient list in their night cream (ugh! I hate that). The bottle on the left I’ve had since April, and the bottle on the right is the Cerave I just purchased last week. So...I opened the bottle and put it on my hand to apply to my face. It smelled awful. For the first time, this night cream had a stench. Then I applied it to my face and it began burning slightly and subsided after 20 minutes. Could you shed some light on what might be the case?

I haven’t used CeraVe PM in a while, but I definitely sympathize with the pain of realizing that a company changed the formula for a product that you already liked just fine the way it was, thank you very much. I asked my dad to take a closer look at both ingredient lists to see what might be responsible for the irritation and odor.

The biggest change is that this new version is now paraben-free. But that’s not the only thing that changed. In this post, I’ll refer to the latest version (whatever’s currently posted on the website) as the “2020 version” and I’ll be comparing it to the version that was reformulated in 2018.

When I contacted CeraVe in July 2018, the company responded that they were only using three ceramides and that they had no plans at that point to start adopting the newer versions of the ceramide names. I guess they’ve changed their minds since then and decided to start using the new INCI names of these ceramides. The 2018 version listed ceramide 1, ceramide 3, and ceramide 6-ii, but I replaced them with the equivalent INCI names, for the sake of comparing it to the 2020 ingredient list, which uses the new names: ceramide EOP, ceramide NP, and ceramide AP, respectively. 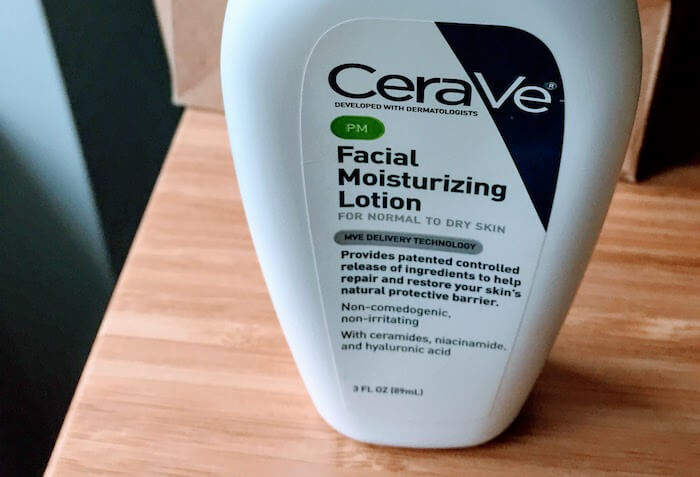 I asked my dad what he thought were potential reasons for the side effects described (temporary burning sensation and bad odor). I also asked him if it was possible that the bottle that contained the new formula was a defect or had expired/gone bad. Disclaimer: Keep in mind that neither of us actually tried the new 2020 formula of CeraVe Facial Moisturizing Lotion PM, so we’re just trying to guess what would cause the side effects that the reader described, based on the ingredient lists.

(1) sodium hyaluronate is the salt of Hyaluronic acid and water which has lower molecular weight(this means is easier to penetrate skin, therefore it’s more irritating to skin.

As for the bad odor, your guess may be right, perhaps the new formula is expired, but if not, may be because its preservative, Ethylhexylglycerin although is a preservative, but in many cases, is not robust enough to use alone in the formula, it needs to combine with another preservative.

While in the old formula, it used the traditional parabens, methylparaben, propylparaben, proven robust historically.

My dad brought up a few potential reasons why the new formula may have led to the side effects the reader described (a burning sensation and bad smell).

1. Sodium hyaluronate in the new formula instead of hyaluronic acid

2. Potassium phosphate has moved up in the new formula’s ingredient list

The second reason is that potassium phosphate moved up in the new formula’s ingredient list. This ingredient may be irritating because it is acidic.

The third point explains why the reader noticed a bad odor in the new version of CeraVe Facial Moisturizing Lotion PM. It’s possible that the reader’s bottle might have been a one-time defect or an anomaly that’s limited to just her batch. But if we assume that it’s not a one-off, my dad’s guess is that it’s because CeraVe changed the preservative system in this new formula.

In the past, CeraVe products (except for the ones marketed to babies) have typically included parabens, which are widely used, field-tested, and trusted. Many baby products market themselves as “paraben-free” because people think they aren’t suitable for babies, but the reason they’re so widely used is because they’re effective, and they aren’t usually irritating to most people. In contrast, other preservatives like methylisothiazolinone can be a common source of irritation. Read the full interview with Dr. Aegean Chan to learn more about why parabens are “unfairly maligned.” I’m not sure when this formula change occurred, but on the website, a CeraVe consumer care representative made this comment four months ago: “We are pleased to share that we have reformulated PM Facial Moisturizing lotion to be paraben free. You can expect to find the paraben free formula on shelves in the coming months.” So it sounds like it was a pretty recent change.

It seems that this new CeraVe PM formula has done away with parabens and replaced them with ethylhexylglycerin, which my dad thinks is not robust to use alone in a formula. He thinks the preservatives in the old formula (methylparaben and propylparaben) are more powerful and historically have proven themselves to be robust, effective preservatives. Since the new formula only uses ethylhexylglycerin, it may not have a strong enough preservative to ward off bad odors and other nasties growing in the bottle. Is CeraVe planning to make this change across other products? I hope they don’t mess with a good thing, because I love my CeraVe Daily Moisturizing Lotion and I wouldn’t change a thing about it.

Please remember that all of this is theoretical, and based solely on the ingredient lists. In this case, we only have a small sample size of one person’s experience (many thanks to this reader, for sharing their experience!). I haven’t personally used the new formula of CeraVe PM, and neither has my dad. However, I hope you learned a few things from this post—I certainly did!