My mom enjoys Korean dramas, Sudoku puzzles, and extracting blackheads. That’s right, those annoying little black dots that appear when your pores get clogged but stay open. When I was a teenager, I had acne on my back (“bacne”), so my mom used to beg me to let her squeeze out my blackheads. She was excited for me when I got into college, she was happy when I made her favorite scones, but I don’t think I’ve ever seen her more delighted than when I grudgingly agreed to let her squeeze out my blackheads. Weird, right?

Today I’m going to focus on a product that’s designed to stop my mom from getting her blackhead-extracting fix: COSRX BHA Blackhead Power Liquid. Side note: I love the idea of something being a “power liquid”—it sounds like the name of a sports drink or something. I somehow forgot about my bottle of COSRX BHA Blackhead Power Liquid, until I recently rediscovered it and started using it again. This poor bottle has lived in obscurity for the past year or so, but today I’m finally giving it the attention it deserves. 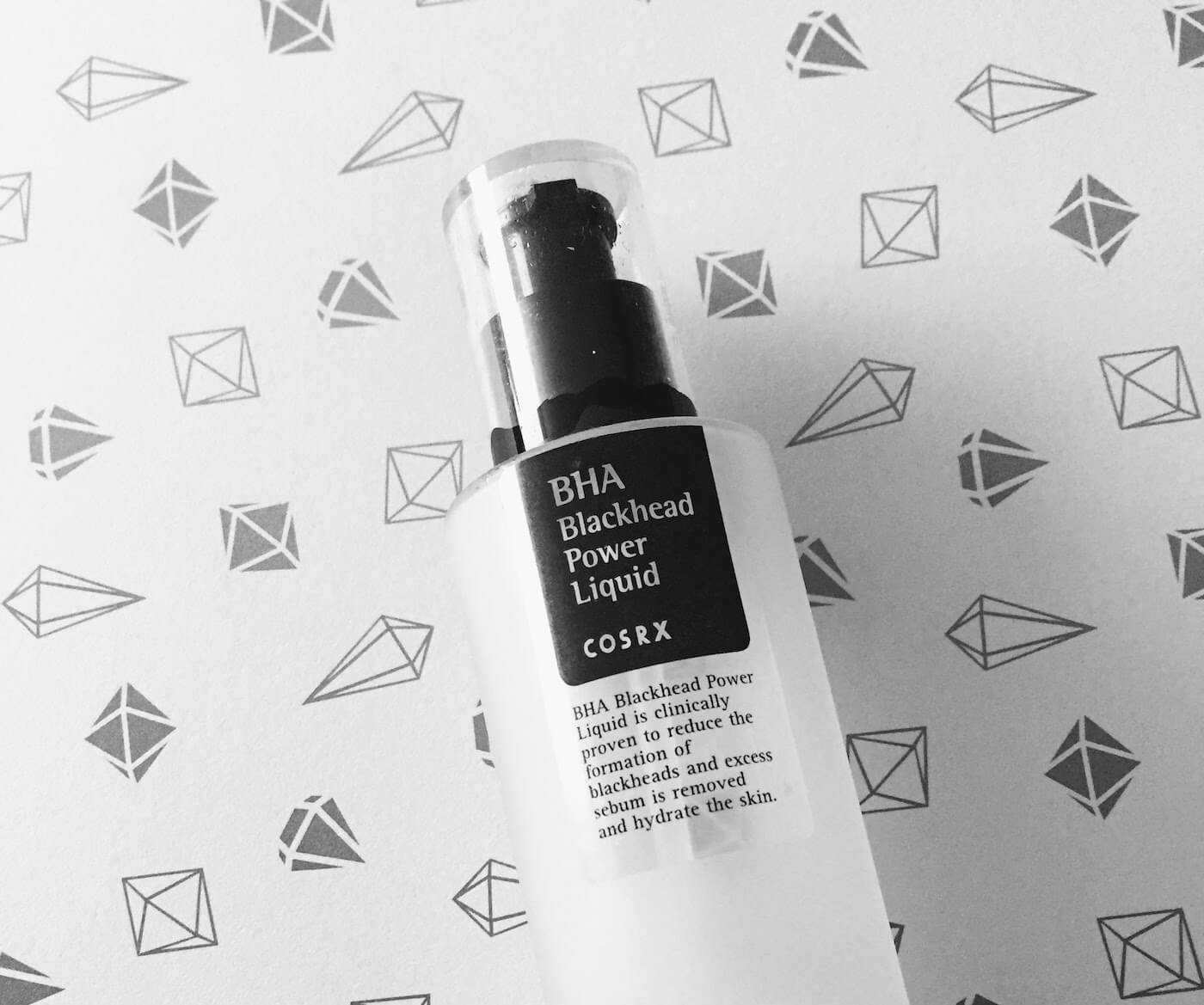 I find COSRX’s ingredient lists to be very refreshing. It seems like their products usually don’t contain fragrances or other unnecessary ingredients like dyes. I really dislike it when brands include aesthetic ingredients that may have negative consequences for sensitive skin. So COSRX BHA Blackhead Power Liquid scores some points for not using fragrances or dyes in their product. Yay!

In this post, we’ll explore how BHAs play a role in skincare products, the BHAs and other ingredients that are included in COSRX BHA Blackhead Power Liquid, and my general impressions of this power liquid, as someone who has adult hormonal acne (including the occasional blackhead).

What are BHAs, and how do they relate to my skin?

BHA is short for “beta hydroxy acid,” a class of compounds that is related to alpha hydroxy acids. Both AHAs and BHAs are used as exfoliants, which means that they are often marketed for their ability to renew the skin and improve its texture. AHAs can be irritating (such as the glycolic acid toner I gave up on), while BHAs are usually less irritating but still beneficial for exfoliating and renewing your skin.

The BHA in this Power Liquid is betaine salicylate, which is salicylic acid combined with betaine. Salicylates are substances that are closely related to salicylic acid, and all of these ingredients are generally categorized as BHAs, even though salicylic acid is not technically a beta hydroxy acid in the chemical sense of the word. But the FDA says that many companies often call salicylic acid a BHA for marketing purposes. Learn more about salicylic acid here.

Betaine salicylate is supposed to be less irritating than salicylic acid, but still have some of the same benefits in terms of exfoliating/renewing your skin and fighting acne.

Anyway, without further ado, let’s look at the ingredients that put the “power” in this power liquid, shall we?

See? Short and sweet. Along with some of our all-time skincare favorites like niacinamide and sodium hyaluronate, the product is formulated with the following ingredients:

COSRX BHA Blackhead Power Liquid is a Korean beauty product that’s not really an essence, not really a serum, just a “liquid,” I guess. Unlike COSRX Snail Mucin Essence 96, it’s not slimy at all—pretty similar to water, actually. It doesn’t leave my skin feeling dry or tingly at all, like an AHA might. I’m not sure about the actual concentration of BHAs included in the formula, or how potent the willow bark water is. This product doesn’t contain regular water at all, just willow bark water, which is interesting.

I find that salicylic acid is generally less irritating than benzoyl peroxide. It also doesn’t stain your clothes or pillowcases the way benzoyl peroxide does, so I tend to prefer salicylic acid over benzoyl peroxide. COSRX BHA Blackhead Power Liquid is gentler than a Stridex pad, and doesn’t leave my face feeling itchy, irritated, or tingly after I apply a pump’s worth of product to my face. I pat it and it dries within 30 seconds, and I can be on my way. I think it helps dry out my blackheads more quickly, so they can come out on their own without being manually extracted by me (or my mom). Plus, it’s gentle enough to use as a proactive measure against future blackheads, even when you don’t have any problems at the moment. For overall acne prevention, however, I still recommend Differin above any other OTC product on the market.