My fiance has a pretty big crop of blackheads on his nose. One day I bought him a pack of Biore blackhead strips as a joke, but he actually ended up liking them. It feels detoxifying to peel off the strip and see a bunch of black stuff on the strip, meaning that it’s no longer hanging out in your pores. During our last vacation in Japan, we bought the Japanese version of the Biore blackhead strips, just to compare them with the ones we usually get.

What are blackheads, anyway?

Blackheads are like whiteheads, only they occur when a blocked pore stays open rather than closing up. I usually get whiteheads, which have a white tip. Blackheads are a little less angry red-looking and juicy, but they’re still annoying. 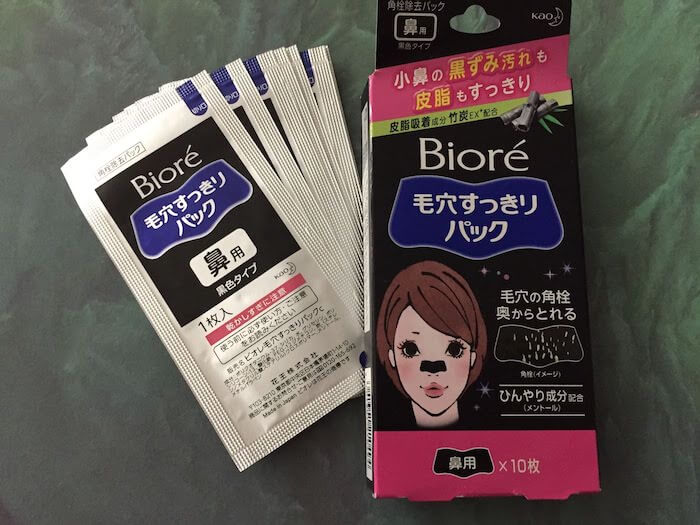 Blackhead strips are used to eliminate these blackheads in commonly occurring places, such as your nose or forehead. They only take about 10-15 minutes. You’re supposed to wet your nose (or whatever area you want to use this strip on), and then apply the strip on the wet area, and let it dry for 10-15 minutes until it hardens. After time’s up, you pull it off with a flourish and you get to inspect what you’ve removed.

The Japanese version of the Biore blackhead strips were not as good as the American ones for a few reasons:

I’m not sure if blackhead strips are generally accepted by professionals as the most effective blackhead-removing procedure, but I do think it makes sense to use them once in a while if you have lots of blackheads concentrated in a small area like your nose.

I also recommend using them sporadically, in case they tend to irritate your skin or aggravate it too much. Even Biore recommends not using them more often than every three days, which makes me think that they have the potential to irritate some people. I also recommend buying the American version of the Biore blackhead strips, rather than the Japanese version, for the aforementioned reasons.

I think it might also be worth trying the Aztec Clay Face Mask (read the review here. Whereas blackhead strips usually come in pre-defined sizes, a clay mask is easier to apply to areas other than your nose, and always leaves my pores feeling cleaner.